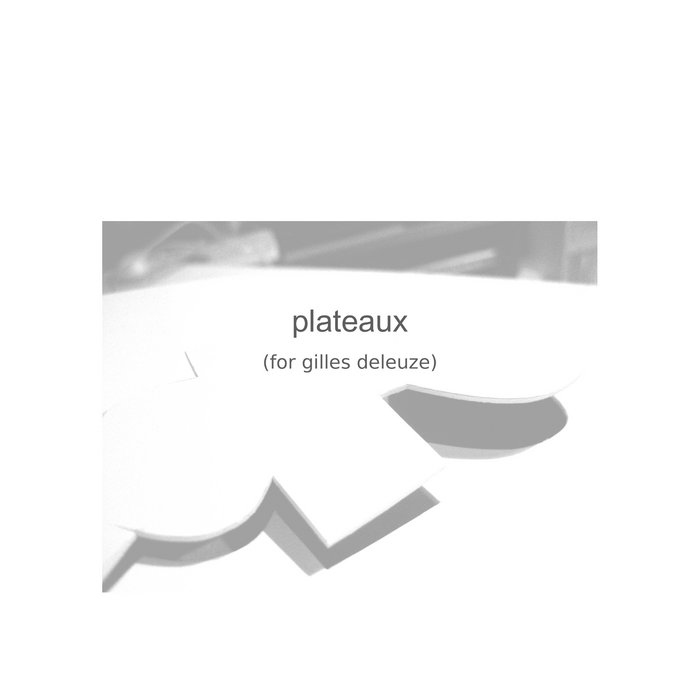 In keeping with the typical Koyuki standards Plateaux is very minimal, both in the sonic and the graphic design (the latter courtesy of Luigi Turra). The inexpert ear could easily position it in the undeserved company of less significant onkyo-derived releases, yet this would be terribly wrong, as Gerard knows what he's doing much better than hundreds of so-called “alternative” artists. His sense of event placing is astonishingly acute: there's not a moment in the whole album in which a sound appears unnecessary or unwanted in that particular instance. Speaking of tone and timbre, he masterfully alternates vapour and grain, sequences of hovering low-frequency “presences” interspersed with jagged interruptions and piercing interferences, like needles waking us up from a hypnotic illusion. One feels isolated and enraptured at the same time, the practical incapability of defining the sources of these undersized daydreams an actual advantage. This mixture of dynamic activity, extreme accuracy and mesmerizing minimization of nervous peaks - clocking at the perfect length of half a hour - should not be left disregarded.


Pierre Gerard is a musician from Belgium who probably has an interest in philosophy. For his release Plateaux (For Gilles Deleuze) for Italian label Koyuki he even refers to one of the modern thinkers. I am not really known with the theories by Deleuze so I can't say if the music Pierre Gerard creates fits with this or not.
Though, Gerard himself has a philosophic approach to music which he explains as “the music is the form of creation which enables me best to carry out an object without matter” . You could relate to this as music is a form of art without being able to touch it. The art lies in the form of the sound waves. Things that matter are duration, soundcolor and dynamics. The only physical about music is the media it is brought on (in the case of this album a cd-r).
I think he has a point there. Nowadays with all music being available over the internet, either through file-sharing of digital download shops, to a lot of people the format in which music is published doesn't matter that much anymore. The essence of the music remains the music, and all the extras are fun but are not elementary.

For the release Plateaux (for Gilles Deleuze) this theory gets adapted to the sound. Pierre Gerard does not play with harmonies, melodies and rhythms but rather sculptures with sounds. Main ingredient is silence, but when you turn up the volume sounds appear. High pitched sine tones appear and random glitches plop up. In the piece there isn't much development but more to the end there are also sounds appearing which hit the lower side of the spectrum.

This is not really music you can write about very much. There aren't too many surprises but when you have heard more of this kind of minimal music you don't really expect to get some. Either you like this or you don't. For what it is worth I like it but wouldn't play it too often.

Over the last however many years I've been writing Wonderful Wooden Reasons the number of truly minimalist recordings I've been sent is extremely low yet this month I have two, Wechseljahre Einer Hyäne by Radu Malfatti and this newest release by Belgium composer Pierre Gerard.
This is the sparsest of music. It's barely audible pops, squeaks, hisses and rattles are easily destroyed by the clatter of everyday life but in a quiet and relaxed environment they sing beautifully.
I find music of this sort to be utterly entrancing but equally I find it incredibly difficult to review but hopefully I've said enough to intrigue you into buying.


Pierre Gerard has his own release on an Italian label called Koyuki, and things here deal with Gilles Deleuze - the philosopher who was so important for some musicians, but whose writing always eluded me a bit. Gerard writes me: 'the music is the form of creation which enables me best to carry out an object without matter (immateriel in French), some is its dimension, its duration, its form or its color', which, I must admit, doesn't make things much clearer, I guess. The word 'careful' applies here too. Gerard plays electronic music, in the best microsound tradition, but with more silence than say the [-Hyph-] record reviewed elsewhere. It seems to me that he uses feedback in a highly processed and toned down form, to which he has added bits of acoustic sounds, also highly processed. Gerard plays along the lines of Richard Chartier and Roel Meelkop (although lesser of surprise moves here), but certainly has a fine voice of his own. (FdW)