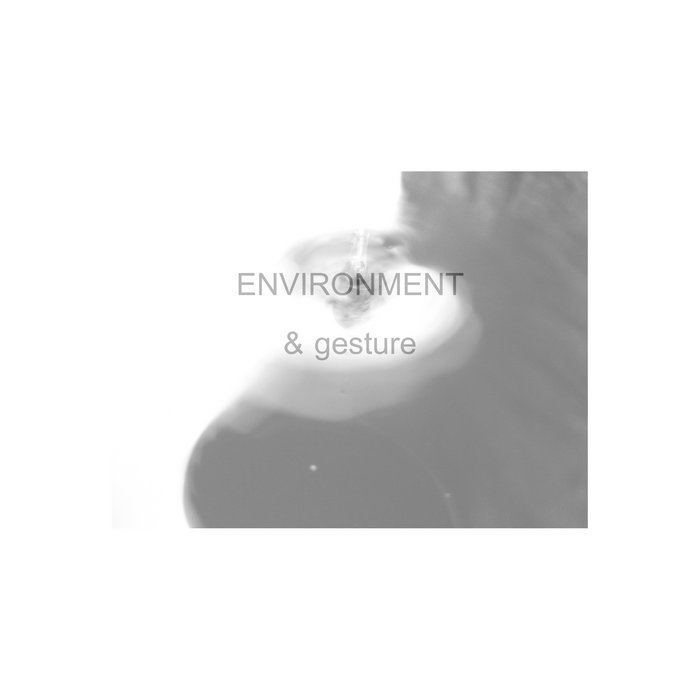 Pierre Gerard and Andy Graydon's tape release from earlier this year saw a long distance sound exchange deploying themes of polarity and homeward migration. Gerard's take on the themes saw an ultra-minimalist approach – as he often deploys – that resulted in a nice piece of hushed concrete-drone music. As minimal as that piece was, it sounded tumultuous in comparison to ENVIRONMENT & gesture.
On their own, the three tracks that make up the album give little to no reward for the listener, elapsing as lackluster environmental backdrops: a water droplet here, a rock thud there. After the 20 minute opener the sound of a stream is introduced, which slightly livens things, though barely. But Gerard hasn't just presented an album of boring field recordings, his intentions are far more earnest.
From his perspective these recordings are the product of seamless improvisations, where the sounds of objects and instruments are integrated by the "performer" into an environmental soundscape by complimenting it as opposed to dominating over it. Rightly so, Gerard choose nearly silent locations to perform these passive improv sessions where even the slightest of movements likely had the potential to impede on his vision. In these recording situations discipline and restraint become important factors, and although the outcome isn't the most engaging, there is much revealed in the artist's intentions and in the sound work itself if one can spend time with it. Yes, this just might win you over. Recommended.

Pierre Gerard is a master of the barely there brand of minimalism and a firm favourite here at Wonderful Wooden Reasons. His music is a perfect example of a truly ambient soundworld. His, often seemingly commonplace, sounds are so delicately positioned that it's all too easy to forget that there is a seedee playing and to thoroughly believe that these sounds are part of your immediate everyday environment.
This is music that augments on a level of subtlety that I find deliciously insidious. It spoils you for more overt sounds, they become cloying and bombastic, and leaves you craving the delicate fragility of these compositions.

Belgian sound artist works with objects and electronic devices. He has been active since 2007 releasing CD-R's, CD's and a cassette for the imprints White Line Editions, Koyuki, Dragon's Eye Recordings and 3Leases, among others.
Drops of water are the main sound in this record which is electronically manipulated. The minimal aesthetic on this CD is sometimes close to silence and bits of tiny drops configure an special rhythm.

ENVIRONMENT and Gesture is the new release from Pierre Gerard , a Frenchman who is making a form of very gentle intervention in our daily surroundings with his near-imperceptible sonic actions, a strategy which to some extent aligns him with Jeph Jerman. His two main objectives are (a) to produce improvisations using common objects, not in the sense that he “dominates” the object like an imperialist invader seizing handfuls of sand, but rather to arrive at an integrated and harmonious situation where man and nature are brought one step closer to happy co-existence. As to (b), this concerns the more metaphysical ambition where he hopes his work will have an effect on time itself, causing a “soft impression” on the listener such that time starts to slide past in a more gentle and manageable manner, presumably a welcome antidote to the pressures of modern urban life where time has been sliced and parcelled into rigid divisions that suit the capitalist agenda. Gerard attempts the above by situating himself in a determinedly rural setting (water, stone and air are his materials) and creating gentle sounds which may involve dropping stones into a pond or engaging with a stream of water in some sympathetic way. The long 20-minute track contains such sounds occurring in sproadic intervals with lots of silence, and it feels isolated, stark, minimal beyond belief. However by the end of the album the external sounds of the environment also begin to appear, and help to put the work into context. I have reproduced the exact typographical rendering of the title of this release, which clearly stresses the element which Gerard regards as the more important of the two in his symbiotic relationship.

In the moment when silence and its weak ruptures become unbearable for a man to sustain, a music based on those very characteristics is equally problematic. When an artist works with micro-elements such as Belgian Pierre Gerard, the challenge is that of pushing a listener to find new implications within acoustic milieus exploited to the bone. ENVIRONMENT & Gesture is a three-part piece whose linearity is somewhat displacing; even more puzzling is the positive reaction of this reviewer in front of natural components – mostly water and faraway environmental whispers, with the addition of an unspecified “instrument” – that have been used thousands of times before by other practitioners of the same area, with increasingly ho-hum results. However, I have come to trust Gerard pretty much throughout the recent past. His method cancels the ego completely, privileging the macrocosmic aspects of an introspective solitude. Accordingly, the work manages to involve to a point of complete participation “inside” the rarefied messages coming from the speakers. Despite the absence of surprises, this record is characterized by a wealth of recondite signals – wrapped in an awful lot of implicit meanings – transforming the hush that follows the end of the album into a deafening dearth of questions, as if all what we needed to know was already printed somewhere in the countryside's scents.

After a couple of CDRs and download only releases, Pierre Gerard now moves into releasing his first real CD, thanks to the advantages some pressing plants offer to do smaller editions. This one is limited to 250 copies. Gerard is a computer musician of the more minimal kind - perhaps: the most minimal kind. He has three pieces here, all improvisations of which he says "i would like to improvise with the most minimal element, which shares our everyday life each minute when we are there. this improvisation does come in a domination of the one on the other, but in an integration. hoping that the sound which I produce would have been able to be without my participation". I left in the lowercase, so that you have an idea. The english could have used some work (but then: usually mine too), but its clear: Gerard works with a limited amount of sound. Objects in the first piece, and instruments in the second and third piece. The 'objects' are the drips of water, perhaps on a small variety of surfaces. Instruments are even harder to define here. In the third piece - the 'fullest' sound-wise - we hear also rain and/or static hiss and the water is now in a constant downfall, which started out in the second piece, but then its very hard to recognize many instruments at all. Quite a strange release, quite conceptual I think and also at the same time quite a beautiful release, very contemplative. Play loud or play soft - this is very much grounded in the work of microsound, and perhaps as such as not the most original one, but it's all done with great care. (FdW)