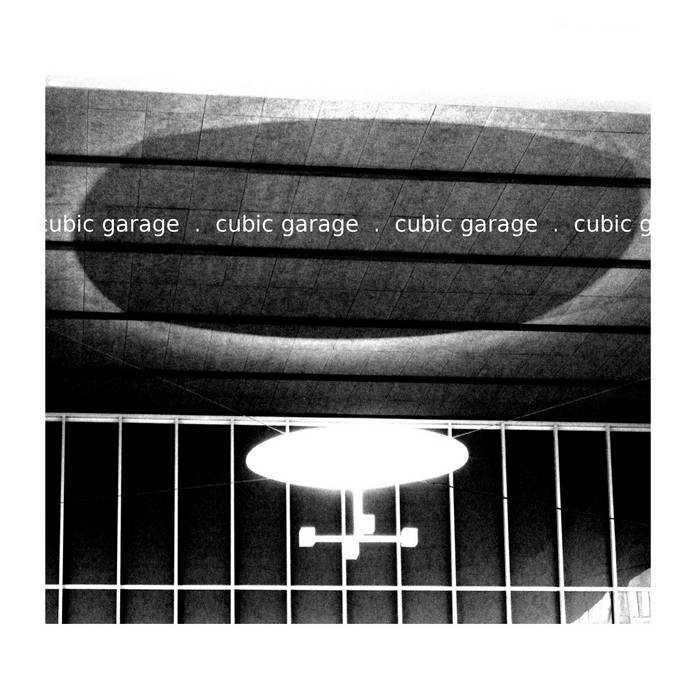 Another highly minimal composition from Belgian composer Pierre Gerard, which arrived in same bundle as architect (noted earlier). Cubic Garage features a rather elaborate package, a small booklet format larger than the average CD wallet, in which is mounted one of 21 copies of the limited-edition CDR. There’s also a printed insert sandwiched between layers of permatrace, concealing the artwork, obscuring the messages. With all the white space, lower-case typography, and aura of severity, I’m reminded, as I often am, of the packages we used to receive from winds measure recordings, which in turn put me in mind of minimal and cryptic artist’s books that I have some distant memory of seeing in display in the Whitechapel bookshop once (something you’d be unlikely to see these days, I warrant).

On the disc, Gerard offers us his usual strategy of granting us micro-seconds of musical information in between long silent passages, a trick which today is having the effect on me of a form of torture – unbearable tension waiting for the next sound to appear. Blink and you miss it. Matter of fact it’s so unobtrusive most of the time you’re not even sure you heard it. If the intention is to create scads of ontological doubt in the poor noggin, consider me fully processed in that area. Where do I report for my next dose? Gerard plays the cello I seem to recall, and if you’re lucky you might be able to savour a tiny fragment of warm cello bowing for less than half a nano-second, but don’t count on it.
It’s more like a stab than a bowing action…or perhaps a tiny needle dart, a pinprick in the gigantic shoulder of the human race. If you manage to locate a sound, I’d advise you to grab it with both teeth and chew it for as long as you can, even if you feel you’re being asked to “eat the air, promisecrammed”. So far I’m reminded of the B.C. cartoon strip by Johnny Hart, where Grog catches a snowflake on his tongue and chews it for an inordinate amount of time. (Punchline is: “the poor schmoe got the one with the gristle”).

I will say the cover to this one is a masterpiece of enigmatic information. Inside are a few lines printed in French and English, which may summarise the structure or intention of this composition. “One minute of referred poverty / A lake of indifference” is how the translated version reads, and I hope that isn’t too much of a disclosure of Pierre Gerard’s intellectual property. I too have bathed in the lake of indifference…who hasn’t? I think the over-crowded world today encourages indifference, since there’s simply too much for us to consume, too much information to take in, and too many demands on our time. Consequently we end up confused…instead of concentrating on the things we love, we grow callous and jaded about everything. Each time we scroll up and down on our mobile devices we add another drop of water to that lake! Then there’s the image, which is a monochrome gem of inscrutable beauty and compacted information. Those numbers you see are overprinted and just tell you the times of the five untitled tracks. But look at those shapes and that grid device…are we now inside the cubic garage? Is it nothing more than the space where Gerard parks his Bugatti? I totally love the vague oval shapes, especially the looming shadow on the uppermost part of the image, and right away mistook it for an airship, a blimp. Matter of fact I intend to use this image as an alternative cover to Led Zeppelin’s Presence. It’s a perfect fit.

Having completed today’s spin, I find there is a lot more sonic detail on offer than I might be making out, including about five seconds of real-time location recording where the outside world makes an appearance to this otherwise sealed-off experience, along with Pierre singing. That moment alone is worth the admission fee. There are also tasty plucks, strange hums, eerie piercing tones, and segmented samples which if strung together in the right order might reveal something about this “deferred poverty” that occupies the composer’s mind. If you enjoy solving crossword puzzles while listening to music, here’s a way you can kill two birds with one stone. From 17th January 2018.