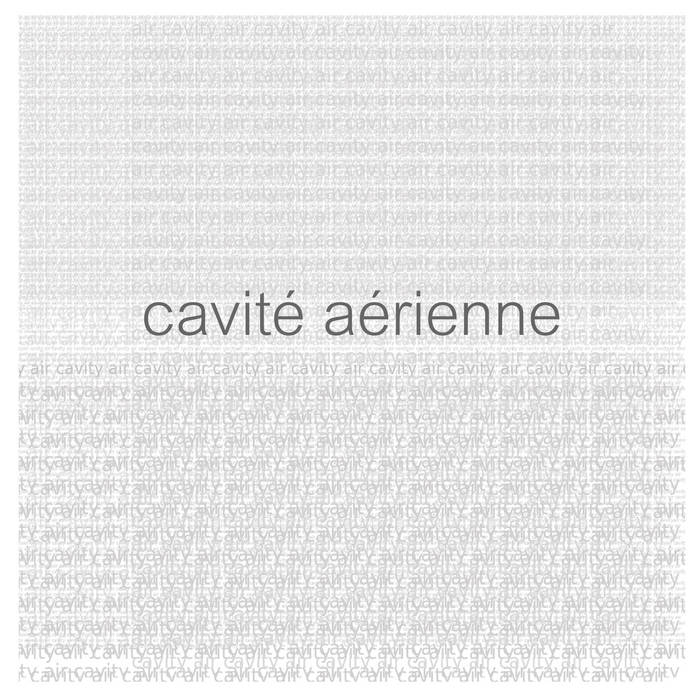 
listen to on speakers ..
(ideally)

Latest release from Belgian composer Pierre Gerard is Cavité Aérienne (SELF RELEASED), a highly evocative title whose literal translation into English gives us something like “airline cavity”,perhaps referring to the baggage compartment or the aircraft’s hold in back where the pets are kept locked up in boxes. As you may recall Gerard’s work has sometimes surfaced on Pedro Chambel’s enigmatic label, but he also sends us occasional self-releases such as this one. Pierre Gerard is one of these ultra-minimal cryptographers for sure, and he also likes to print scant information on the covers, stripping away everything but the barest facts about names, dates, and places.

The vibe I’m getting this time from reading these meagre lines, and hearing the meagre music, is that in this case the lines are increasingly blurred between performance, composition, improvisation and recording; or to put it another way, all four activities are granted equal weight, both in the realisation and the presentation of the work. At the same time, Pierre Gerard reserves the right to remain ambiguous where it so suits him, a strategy which can only work in his favour. I suppose that both of these long pieces are electro-acoustic works at the very thin edge of the margins…the first piece ‘Air’ is a combination of electronic sounds with acoustic instruments – namely the tenor saxophone of Bertrand De Lamalle and the cello of Pierre Gerard himself. Interestingly, the electronic parts seem to have a history extending back to 2011 at least, suggesting to me that Gerard is the type of composer who lets his ideas ferment in barrels for several years before releasing that intoxicating cognac to the audience. Of course, you may find the experience more like inhaling a dose of ether than drinking a glass of brandy. I say this because although there may not appear to be much going on, the sonic information that does eventually reach our ears is quite intense and overpowering, but in a rather ethereal and wispy manner.

I always feel my house is inhabited with bizarre phantoms after playing a Pierre Gerard record, and I have to purchase a psychic broom to sweep them out afterwards. The sax and cello parts seem to have an improvisatory aspect to them, but if you were expecting a lively duo of skittery notes and energised parps, be warned that the life has been bled out of those performances for presentation in this glacial block of solid ice. Or has it? Perhaps the life has been recast in a new, unexpected form, to release its energy into your system like a slow-acting drug. There’s another “ether” reference for youse…the second piece is called ‘Cavity’, and uses much the same strategy as above – electronic sounds blended with a musical instrument, except this time it’s a guitar and no performer is credited. Perhaps this time we don’t have a budding Segovia or Julian Bream type in the frame and Gerard is simply lying a guitar on its side for use as a resonant box. On the other hand, some sketchy riffs and notes do float into the arena now and again, in the usual drip-feed method that characterises this very austere composer. At least 75% silence is the benchmark he aims for, with fragments of unobtrusive sound dotted about in selected parts of the frame. Again there’s the timelag aspect, and this time the electronic sounds began life in 2009. Perhaps the use of span dates indicates a very long maturation process for this part of the work. I would very much favour the idea of a composition gradually forming itself into a realised work, like evolving crystals or strata of rock, rather than the sort of “instant” realisation that less patient artisans settle for. ‘Cavity’ is subtly different to ‘Air’ at some level I can’t quite figure out, but there could be more going on in the way of processing; it’s more recognisably “electronic” in tone, and there are more juicy moments of sonic knot-tying to wrap your big toes around.

All in all, I was half-expecting from the title of this work to have the aural equivalent of passing an hour inside a cramped flight compartment, as if I myself were an unfortunate cat in a pet box being flown to Amsterdam or Slough. Certainly I think of one or two modern musicians who would be only too happy to deliver a claustrophobic experience like that, and there are those who have also recorded their own flights on jet planes to produce music comprising flat, grey drones. Instead, Pierre Gerard has created a very liberating and open experience; if I am flying, I’m certainly not locked inside a box and seem to be suspended in the blue stratosphere by powerful unseen forces, flying without restriction towards my goal. Free! From 6th December 2018.