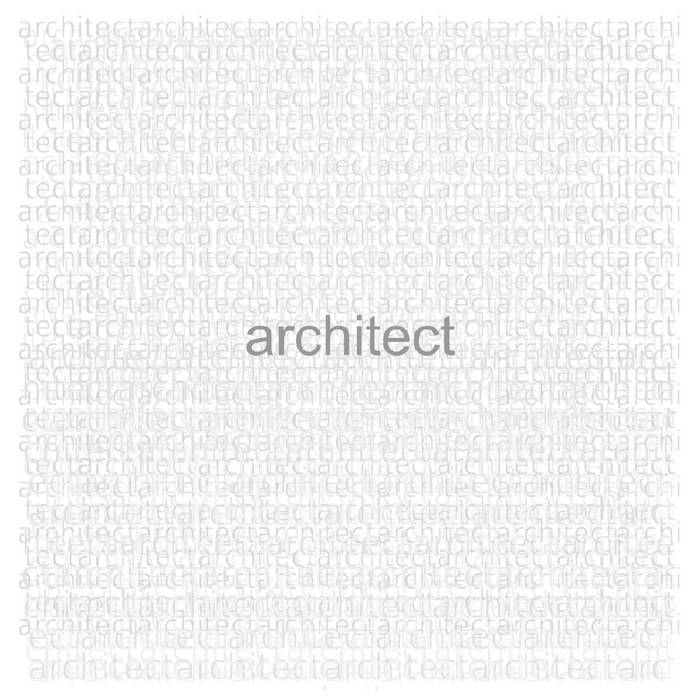 architect │, Ӷ, Ξ are studies on what surrounds us
and who remains sometimes invisible ..

thanks to giuseppe ielasi ..


listen to on speakers ..
(ideally)

Soon after discovering the work of Pierre Gerard four or five years ago, I rapidly became a completist. This was occasionally something of a guilty pleasure, as instead of listening purposefully I would often take advantage of the luxurious expanse of his minimalism to cleanse the palette. An excusable habit for hyper-consumers of audio like myself, but one that listeners should avoid repeating with his newest release on Senufo Editions, Architect.

To begin, Gerard appears to be playing with the concept of manual and manufactured aesthetics. Expanding on the titles’ analogy a bit, the birth of modern architecture was largely a result of technological advances in production methodology. Instead of materials both crafted individually by human hands and bearing significant physical and aesthetic properties of their original state, construction materials began to be developed mechanically, serially and in forms increasingly divorced from cultural design or social imperative. Likewise, the ability to reproduce sound acousmatically, that is, without requiring the presence of its original source, had a similar impact on musical composition. Recording and audio reproduction technology commonly allowed a critique or, at best, a reconstitution of aesthetic norms (at worst, it repeated them for yet another century). Architect mines both of these methods of production for meaning and metre.

What makes this work initially stand out, especially to a listener with some knowledge of Gerard’s past work, is that despite the accretion of sound in a largely deconstructivist manner, much of the source material Gerard uses and digitally arranges across (particularly) the first and third pieces is in fact recognizable as acoustic instrumentation. Its most notable use is in the opening ‘Architect Ι, The Mechanics‘, where the natural attack, decay, timbre, pitch and amplitude are periodically allowed to exist and even harmonize unadulterated. By contrast, the more aleatoric second track, ‘Architect Γ, The Structure Of A Rock On A High Mountain’, reduces the audio envelope to subharmonic and heavily time-shifted scales where such sources are indeterminable. The question of whether or not the samples of the first are used on the second (or final) track may be answered by the work’s subtitle: ‘Three studies on what surrounds us and which remains sometimes invisible’. However, in my opinion the recitation of the iconography of traditional musical aesthetics is the more important contribution of the opening piece. With notes from the diatonic scale fresh in the listener’s mind, albeit rather few of them, he or she is left to re-evaluate their expectations of just what constitutes musicality across the rest of Architect.

‘Architect Γ…’ in particular challenges the manu-aesthetics (to borrow a term from architect Rifat Chadirji) of ‘Architect I…’. Revisiting the subtitle, the listener would expect it sufficient to examine the unheard or under-appreciated dynamics of the sonic range heard in the first piece. Gerard goes rather beyond this, however. Rigorous silence so efficiently decontextualizes what sounds do appear as to necessarily lend their sonic characteristics a sort of self-induced logic and stability. Using a palette found more frequently in his oeuvre than that on ‘Architect I…’, Gerard aptly finds appropriate timescales for these auditory fundamentals to play out – occasionally stuttering, other times droning, but always resolving as a self-sufficient monad. The recurrence of recognizable classical form in the last piece, ‘Architect Ξ, The Distance Between The Elements In A Small Forest Area’, has the quality of an apparition and is frequently directly contrasted and in turn harmonized with more synthetic counterparts, bringing the dichotomy of the first two works to a rather pleasing resolution.

All that said, I would be doing a disservice to Architect if it was implied that the album works only on a conceptual level. Given its delicacy and balance, it is easy to empathize with Gerard’s auditory ethic. The hissing recording artefacts that blink in and out of existence across the work are both implicative and dramatically tense. The spacious minimalism and simple structure allows what
would be mundane notes and rhythms on other albums to feel sonorous and carefully crafted on this one. Gerard has a well-developed ear for microsonics and as a whole Architect is a delightful listen.

Through the label of Pedro Chambel, we heard the music of Belgian composer Pierre Gerard on a split record Études released with Bruno Duplant. Consequently Gerard himself sent us a package, which landed here 17th January 2018. The CD architect (senufo editions # fifty) is packaged in a very attractive letterpress cover. All the white space and small fonts (in lower-case natch) tip you off to highly minimal contents. Cover image baffles. For some reason I thought it was a modernist light fitting hanging from a white ceiling. Now I think it might be some untipped cigarettes in a dispenser. This might be the reward for the listener, even if they do not smoke.
The three parts of architect are distinguished by unusual glyphs or symbols, which precede the subtitles; part one is ‘the mechanics’, part two is ‘the structure of a rock on a high mountain’, a situation which reminded me of the title of the last one we heard, ‘L’innocence a la verticale (sur la falaise)’. I was daunted by the possibility that “we have to climb a sheer rock face, like mountaineers, in order to understand or experience this music”. Today though not only is the music more approachable for some reason, but evidently Gerard’s concern is a more general one to do with space itself. The third part of architect is ‘the distance between the elements in a small forest area’. The whole work is intended as “studies on what surrounds us”, indicating an interest in the environment, “and which remains sometimes invisible”, indicating the metaphysical side to
Gerard’s work. To navigate this space, Gerard’s plan on ‘the mechanics’ is to propose a 20-minute block of total silence, whose serene beauty is only occasionally interrupted by tiny fragments of sound, fragments which might have some basis in music. Low hums, creaks, imperceptible drones. We’re in the presence of a church organ played by the world’s most diffident and philosophical organist, who only communicates the melody of the hymn to us with two or three understated notes at a time. The congregation can do the rest.

‘the structure of a rock on a high mountain’ continues this theme, though with recognisably different elements. Fluttering as of butterfly wings, plucking strings, strange unidentifiable rustling. The occasional sharp cut-off effect which surfaces now and again reminds me that Pierre Gerard works in small samples of sound, which he assembles with great deliberation, releasing small microscopic atoms of compressed information into the ether. We need to have a long memory to “read” this music, assuming that is we are intended to put the fragments together. Maybe the intention is to show how everything in life is unknowable, occluded, mysterious in origin. At all events this “mountain” suite certainly delivers more in the way of incident and substance than part one.

Lastly, ten minutes of ‘the distance between the elements in a small forest area’. Near the start I heard a few precious moments of drone music that was simply beautiful – sounded like a plucked cello string along with a harmonium. But it vanishes almost instantly. I could happily have enjoyed a whole album of music like that, but Gerard’s plan is much more severe. Wait patiently and the next snippet of data may pass before us like a passing train (a very small train) in the middle of the night.

As a philosophical contemplation of invisible things which surround us, this record invites the mind to speculate about it is that we might be missing as we go about our hum-drum lives, presumably rushing about too quickly to see anything and making too much noise to observe the real presence of these invisible things. They’re not supernatural beings at all, according to Gerard (I would guess); the fact he might see himself as an “architect” of this unseen space means that to him they are real, present, every bit as tangible as a concrete blockhouse or an elevated ring-road. All he has to do is reveal them. Perhaps compositions like this represent his attempts to create blueprints for our surroundings.